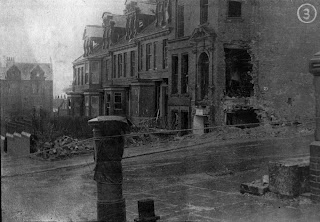 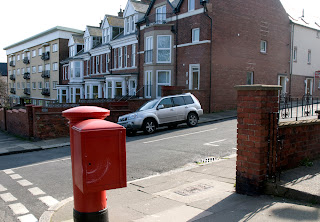 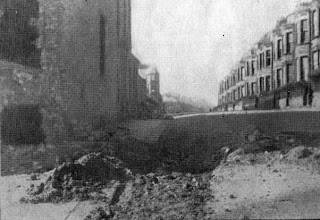 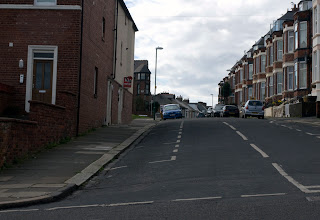 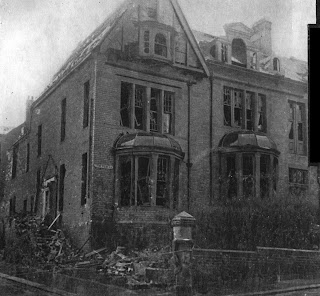 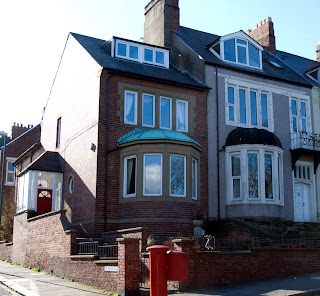 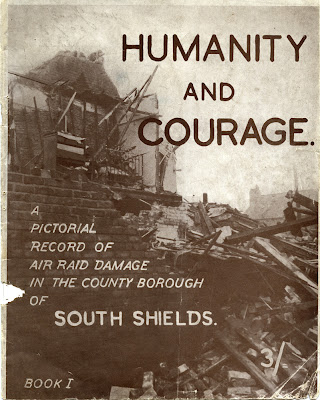 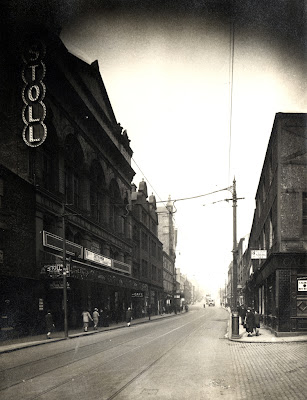 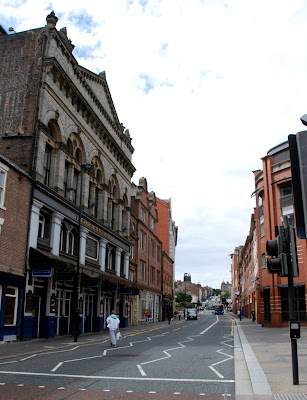 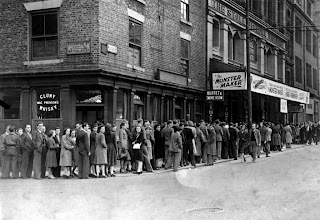 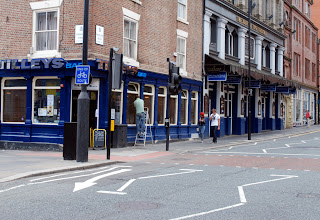 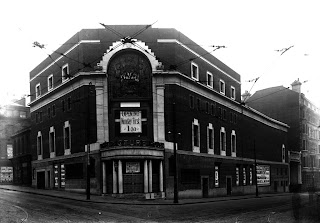 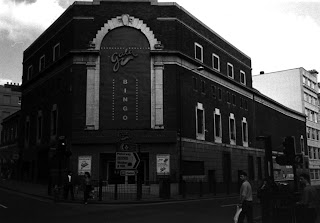 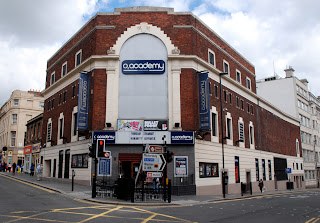 Click on pics for larger versions.
Newcastle, like the rest of the country, had a wealth of cinemas in the 20th century which are now gone. Even the Warner Brothers Multiplex at Manors has been replaced. Two that have survived are less than 150 yards from each other, on opposite sides of Westgate Road and have both been through several adaptations to survive.
The Journal Tyne Theatre, as it is known now, started life as The Tyne Theatre and Opera House in 1867 but was fitted with projectors and renamed The Stoll in 1919. By 1974 it had become outdated and was closed down, but didn't remain empty for long as it was reopened as a theatre in 1977.
The photo of The Stoll showing the view up Westgate Road is from 1928, the queue to see 'The Monster Maker' is from 1945.
The O2 Academy on the corner of Westgate Road and Clayton Street is probably best known as the Gala Bingo which lay vacant for many years until it underwent renovation and opened in its current incarnation as a live music venue in 2005. But it went through many years as a cinema before its bingo hall days. Opening in 1912 as The Picture House, it would have been among the first purpose-built cinemas, and it went through many identities to suit the fashion of the day; The Westgate Road Picture House (1914-1927), The New Westgate (1927-1937), The Westgate (1937-1950) and The Gaumont Cinema (1950-1958).
The shot of The New Westgate was taken in 1927 and seems to have been before its grand opening under that name. The date of the Gala Bingo photograph is unknown but looks to be from the early '90s.
The Stoll 1928 & 1945, New Westgate 1927, Gala Bingo © Newcastle Libraries
Tyne Theatre 2010, O2 Academy 2010 © Chris Perriman
Posted by chris perriman at 21:22 1 comment:

Sorry there's been no activity on this blog for almost a year, 2010 wasn't the best year for me employment- and health-wise but 2011 seems to be going well so far so I thought I'd try to resurrect this project.

I've been taking photos and have several new posts lined up so I'll get them up this week and then get back to doing this regularly. I'm going to try for once a month as it seems old photos that are interesting are harder to come by than I thought they would be initially. If anyone has seen any please leave me a link in the comments, or if anyone has old photos of their own that I could use I'd be much obliged.

One final thing, I'm on twitter now and I'll be tweeting updates as and when they happen. I'm @ChrisPerriman if you want to follow me.
Posted by chris perriman at 22:07 2 comments: 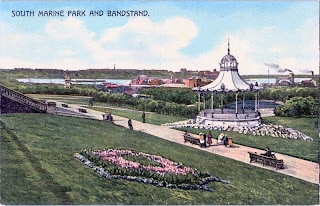 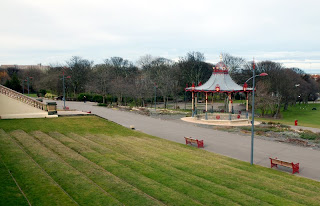 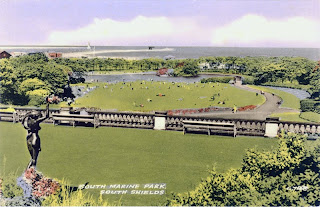 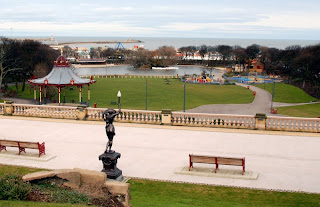 Just a quick one this week, South Shields' South Marine Park (I had planned a couple of the North Marine Park too but trees now block the views).

The Marine Parks date back to 1886 when they were landscaped from the so-called 'ballast hills'; ships on their way to the Tyne to collect coal would be unbalanced if they journeyed with empty holds so they carried ballast in the form of rocks and earth which was dumped on the sea front.

Head gardener John Peebles' meticulous journals were used to restore the parks to their original condition when £5 million from the Lottery Heritage Fund and South Tyneside Council was awarded in 2007, visibly with a new bandstand, the original had been removed even by the time of the second postcard. 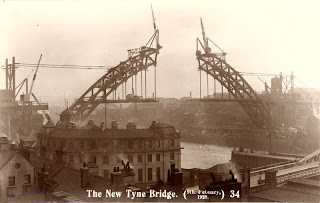 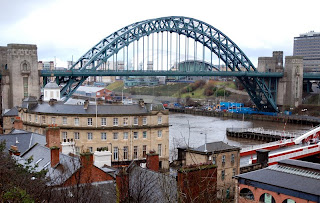 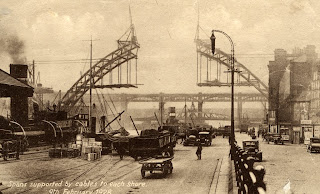 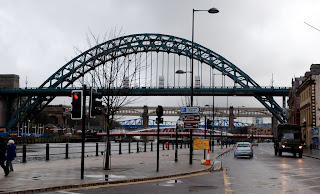 From the High Level Bridge and Newcastle Quayside. Click on pics for larger versions.

The Tyne Bridge is probably Newcastle's most recognisable landmark. Opened by King George V and Queen Mary on October 10th 1928 it is widely supposed to be the precursor to the Sydney Harbour Bridge which opened in 1932.  Although both were built by Dorman Long and Co. of Middlesbrough, Sydney's bridge had already been under construction for over two years by the time work started in Newcastle, and both were in fact based on New York's Hell Gate Bridge which opened in 1916. 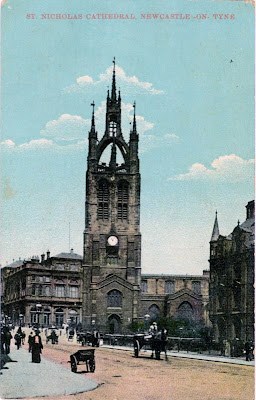 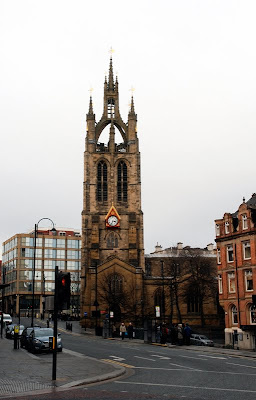 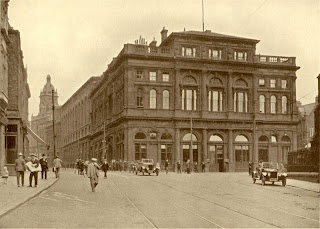 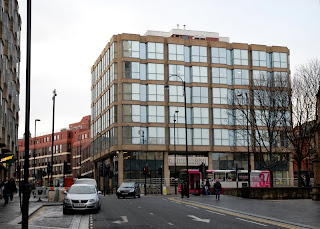 From St Nicholas Street. Click on pics for larger versions.

Newcastle Cathedral, or to give it its full title The Cathedral Church of St Nicholas Newcastle upon Tyne, was built in 1359 with the Gothic lantern spire added eighty nine years later. A church has stood on the site since 1091, the original burning down in 1216. There is little information available on The Town Hall opposite which is a shame as its a spectacular building I'd like to know more about, the first time I'd heard of it was seeing these postcards. Needless to say the side fronting the square has been replaced with the present building, No.1 Cathedral Square, but the Town Hall occupied the entire block between Cloth Market and Groat Market, with a grand entrance on Bigg Market topped with the dome visible in the sepia picture.

Both of the postcards seem to be from the early 20th century, the view of the cathedral possibly earlier, I haven't got exact dates as the site I found them on doesn't have too much information.

Everything in the environs of the cathedral seems to have changed except St. Nicholas' Chambers, the brick building to the right of the cathedral, but that has lost its conical roof above Amen Corner. 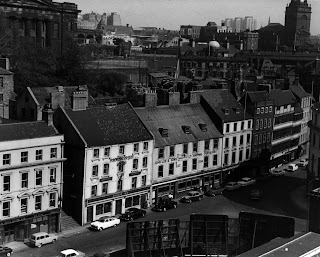 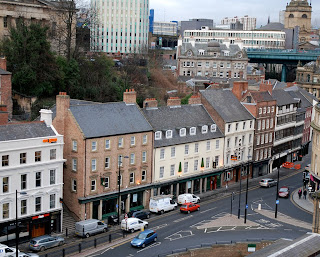 At the Newcastle end of the Swing Bridge, taken from the High Level Bridge. Click on pics for larger versions.
All of the old sailors pubs and suppliers on the quayside are now bars and nightclubs, as is the building top right of the picture with the copper dome, now the Akenside Traders on Side. The dome, bright and shiny in 1966, is tarnished now but the building itself has been cleaned.
Bessie Surtees' House (the old black and white building to the right), the Moot Hall (top left corner) and the Church of St Willibrord with All Saints (top right corner) are unchanged, as are the three tower blocks on the horizon; Lort House, Pandon Court and King Charles Tower were built between 1961 and 1966 so would have been brand new when the first picture was taken.
The new building in front of the church is part of All Saints Business Centre which now surrounds it, the three office buildings being named Aidan House, Bede House and Cuthbert House after the three great north-eastern saints.
The large tower block, familiar to anyone crossing the tyne bridge into Newcastle, is Cale Cross. It had a major renovation in 2002 when it received the distinctive green paneling it has now. It takes its name from the market cross which stood at the junction of Queen Street and Akenside Hill, now under the Tyne Bridge.
1966 photo © newcastle libraries
2010 photo © Chris Perriman
Posted by chris perriman at 18:55 1 comment: